Airbags used to be the preserve of factory racers and wealthy trackday riders but with prices now dropping below £400 for the first time, everyday road riders can benefit from the latest safety tech. But what’s out there and will it work if the worst happens? MCN finds out…

How much will an airbag protect me?

Far better than other forms of armour, but still not as much as you might think. Weirdly, most airbag manufacturers do not make any specific claims about impact protection. The exceptions to this are Alpinestars and Dainese, who say their systems offer as much protection as 18 back protectors stacked together.

Traditional motorcycle armour is designed to protect against injury through impact with the ground – not a large, stationary object such as a car. In this very common accident, secondary to the head it’s the chest and back that bear the brunt, and it’s these areas that road-focused airbag systems are designed to protect. 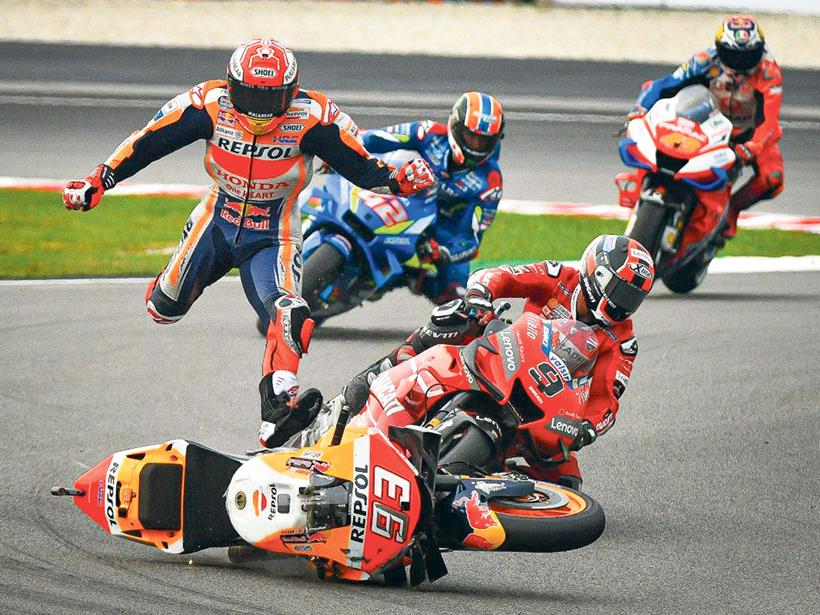 A small study in France, which sampled 27 real-world accidents of riders wearing airbags (and also a gruesome experimental test using cadavers as crash-test dummies – we kid you not!) discovered that airbag vests prevent serious and life-threatening injuries to the thorax at impact speeds up to 31mph.

Although this doesn’t sound like a lot, the level of impact energy involved with hitting something at that speed is immense; the body can only survive so much and no safety kit can protect you completely in all circumstances.

So how did Marquez survive his Buriram horror highside last year? He’s a lucky little blighter – but it’s more than just fortuitousness. 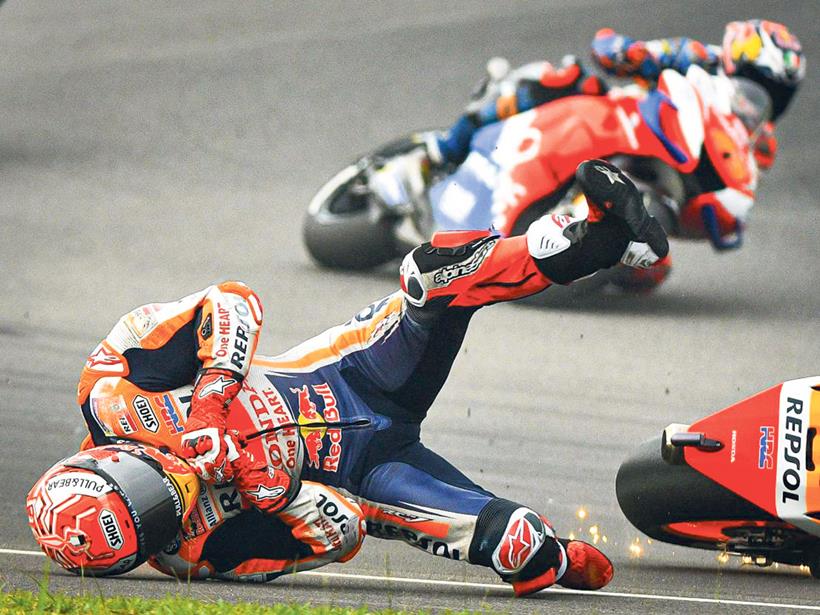 Given that impacts over 30g are when human tissue starts to come apart, the fact that Marquez was catapulted into the air with a force so great that it pushed the rear tyre off the rim of his Repsol Honda, before slamming him into the Thai tarmac with an impact of over 26g, then four hours later going on to top that day’s timesheets, you’d be forgiven for believing he’s super human.

But racing crashes, where the deceleration forces are mitigated by sliding and tumbling, coupled with the load-spreading airbag around the shoulders, chest and back in race suits, mean that riders are better able to walk away from incidents that a decade ago might’ve been career-ending. 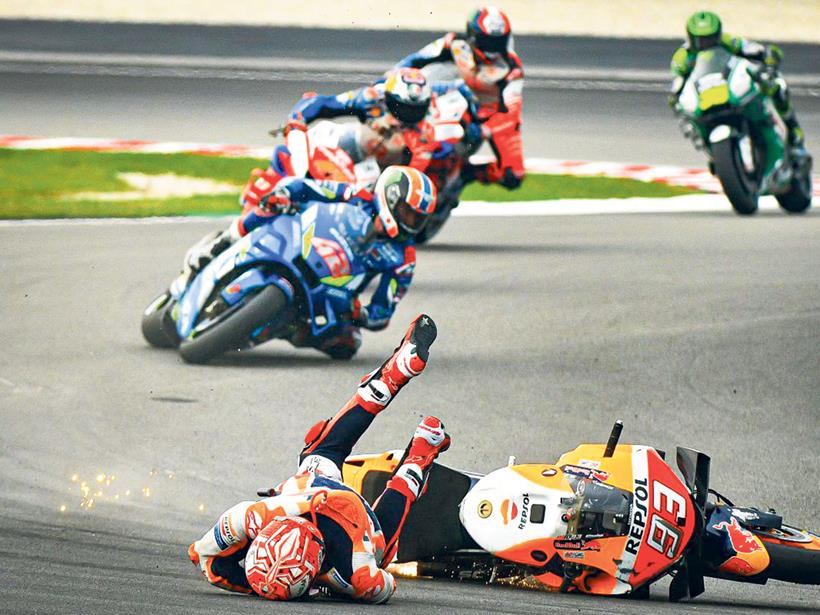 What types of system are available?

There are three different types, each differs in the way it is triggered. First up are electronic, automated systems which rely on built-in accelerometers, gyroscopes and GPS to feed information to a central ECU which will then use artificial intelligence to detect a ‘loss of control’.

Next are electronic systems which use radio-linked sensors on the bike itself to detect a crash. Finally, there are the simplest systems which use a mechanical trigger – a lanyard attached to the bike which pulls a ball bearing from the firing mechanism when a great enough force has been exerted on it – usually about 25kg.

Do I need to buy a whole new outfit? 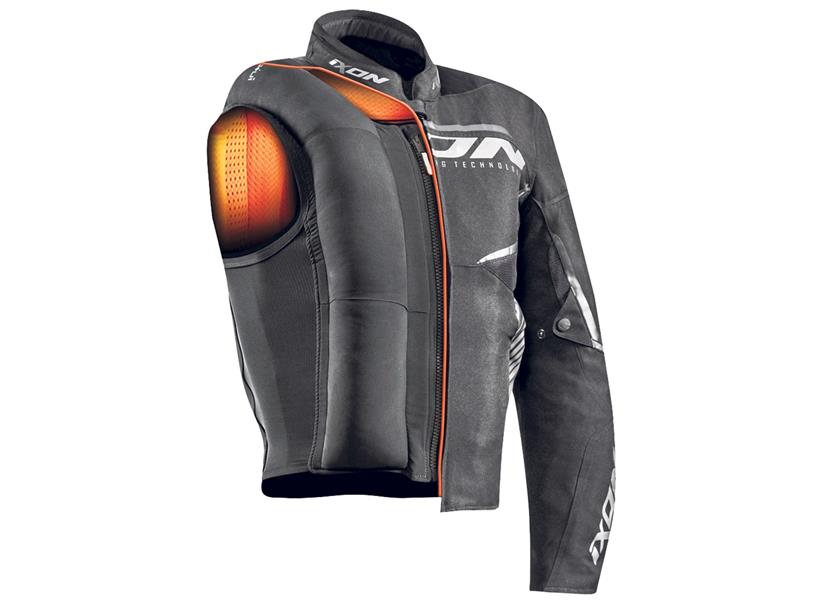 No. The new wave of airbag vests can be worn under (or over) your existing kit, provided there’s enough space. To find out if you have room, put your jacket on, zip it up and pull it directly away from your chest. If you have about 4cm between your body and the jacket you will be fine.

And even if you do wear it beneath a jacket that’s too tight, the systems have a pressure release valve which will prevent the inflated vest from causing you injury through it being too tight.

The Dainese Smart Jacket, Helite, Merlin and Hit-Air systems are all designed to be worn over your riding kit. Dainese and RST also make jackets and suits with built-in airbags.

Are airbag sales on the up right now? 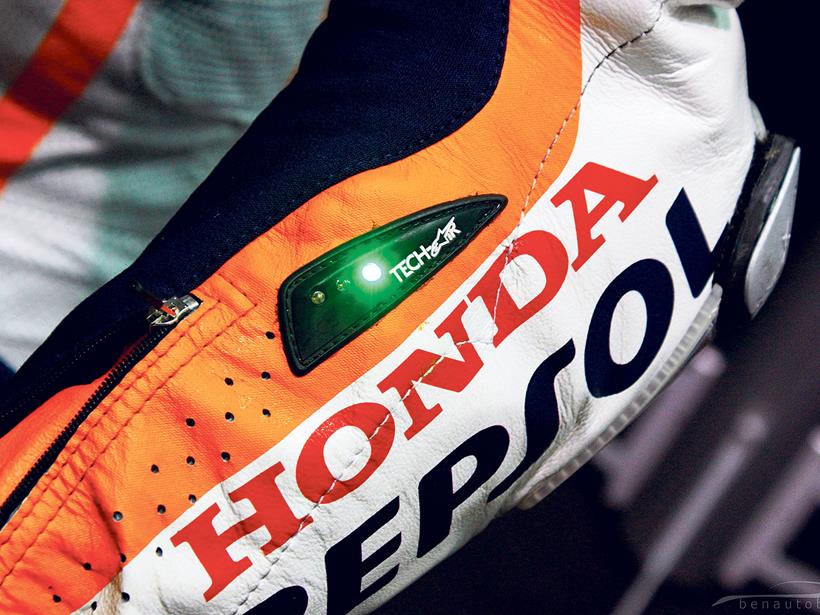 Martin Brown from Dainese dealer Bike Stop reckons so. He says: “We’re probably selling five times as many airbag products than we were three years ago. A lot of that is down to the fact that customers are more aware of the technology because of MotoGP making airbags compulsory, and also because of Marc Marquez’s big accidents! I think competition from other brands has helped too, with In&motion offering their subscription service to help bring prices below £400.

“We started off just selling them to trackday riders who needed to have the latest and greatest tech, but now with the prices coming down many more road riders are investing; at £570 it’s often an alternative to just another regular jacket that they were considering anyway.”

Will it go off if I trip over in a carpark or if I’m monkeying around?

Nope. MCN conducted some highly scientific testing involving a Dainese D-Air Misano 2 suit and a spot of energetic trampolining, and discovered all the bouncing wasn’t enough to trigger an inflation.

Electronic airbags are pretty smart – there’s literally millions of miles worth of riding data powering the algorithms behind the triggering mechanism in a Dainese, Alpinestars or In&motion system.

Plus, the majority of electronic airbags need to detect a GPS ground speed of more than 25kph in order to fire (although the Dainese Smart Jacket is claimed to work from a standstill, in order to protect against being rear-ended).

Is there a CE standard for airbags? 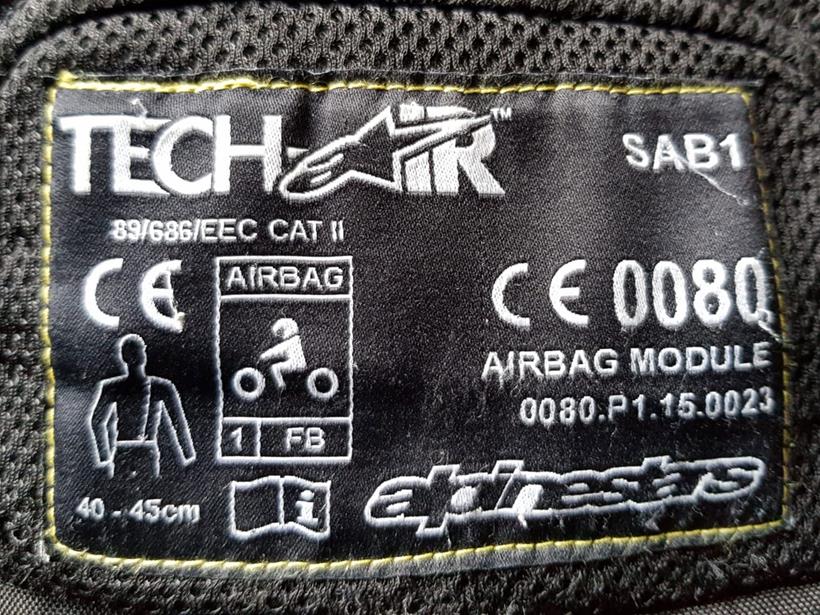 Yes, EN 1621-4 (‘1621’ signifies motorcycle armour, ‘-4’ indicates it’s an airbag) is the standard for Motorcyclists’ Inflatable Protectors, however it’s not compulsory for airbags to be homologated to it.

The standard sets out minimum requirements for activation time as well as protection levels and coverage. Although it was written for mechanical (lanyard) systems, some electronic vest manufacturers will test their airbags to the protective standard just to give customers some information.

As with any CE approval, look for the motorcycle pictogram with the standard number or the word ‘airbag’ printed within it. Or check the manufacturer’s literature/website for certificate of conformity.

Can I trigger a mechanical system if I forget to un-hitch when I get off?

It’s extremely unlikely. According to UK Helite importers airvest. co.uk, it takes 25-30kg of pulling force to cause the needle in the trigger mechanism to perforate the cartridge and release the gas. That’s a damn good yank.

What happens when you crash? 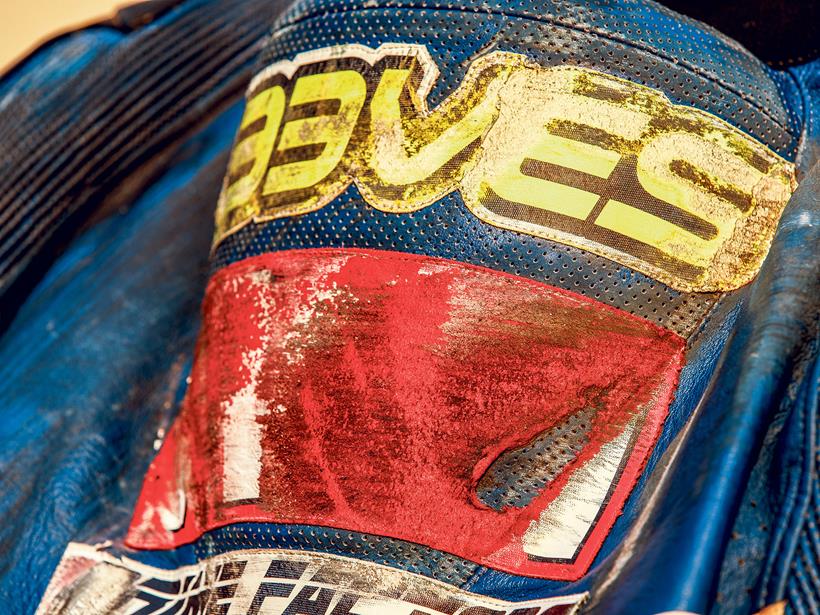 MCN reader and club racer Damon Rides says: “I have a Alpinestars Tech-Air Race vest in a custom-made PSI leather suit. I bought it because, after a fair few trackday crashes, my body was feeling beaten up, so I wanted something that’d offer more than just basic protection.

“I’ve crashed in it four times – three times when it deployed and once when it didn’t. When it goes off you don’t feel it, but as you are tumbling down the track you hardly feel anything on your upper body so you know it’s doing its job.

“The three separate times when it deployed I had crashes at different speeds ranging from 30mph to about 120mph and I do feel lucky to have had it on in the high-speed crashes (during one of which I landed on my head, knocking me out for 45 minutes), as I came away from the crash with no upper body injuries.

“The one time it did not deploy was during a lowside; I think it was because I was already hanging off the bike and leaning close to the floor so it couldn’t distinguish the moment I lost the front. It deployed once I started to tumble, though.

“I wear the same system on the road too because it has the ability to go off on impact even if someone hits you. Buying my airbag is one of the best decisions I’ve ever made.”

Airbags – what’s out there? 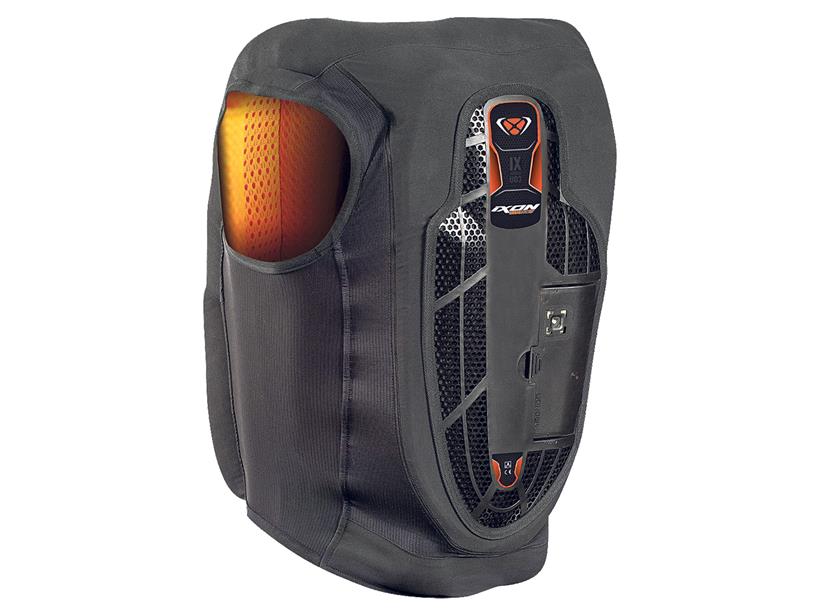 Triggered by these crashes: Collision with an object with an angle between 45° and 135° at the time of impact (Street mode). Highside, lowside with tumbling (Track mode) 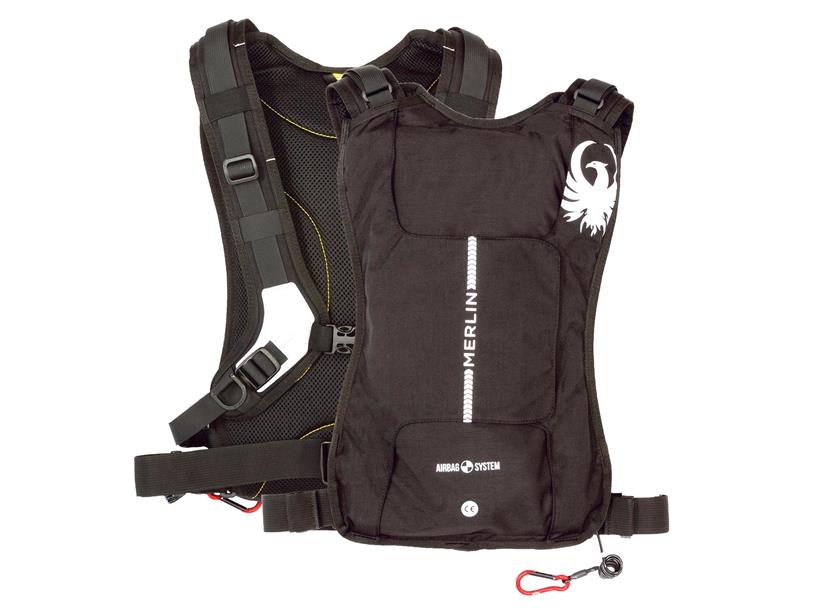 Triggered by these crashes: Any event that exerts a 15kg force on the trigger lanyard

Sizes: one size fits all 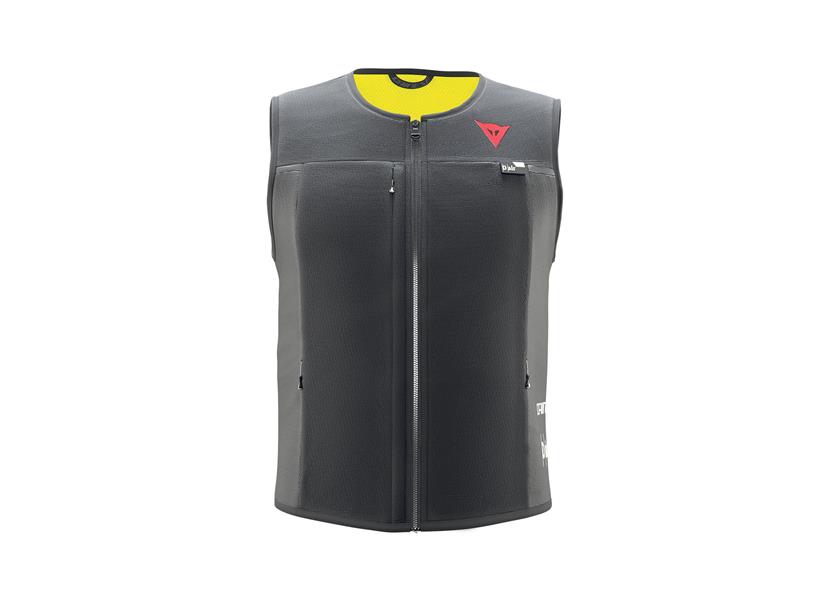 Type: Electronic with GPS universal airbag vest. Street use only

Triggered by these crashes: Being crashed into whilst stationary, highsides, lowside, side impact, rear impact, head on impact, tumbling.

Sizes: M-XL in men’s and women’s 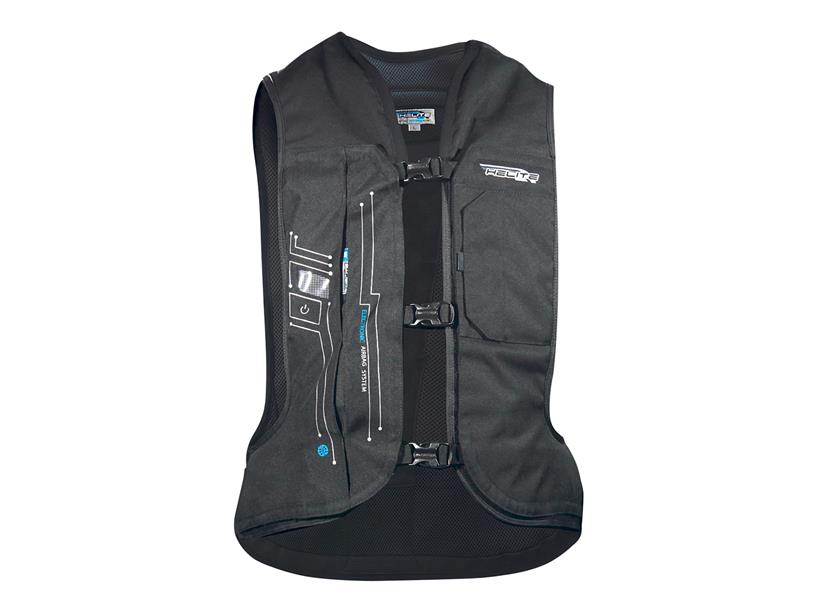 Triggered by these crashes: Any incident in which you are forcibly separated from your bike

Airbag volume: 18-28 litres (depending on size)

Re-gas at home? Yes for £19 Subscription No 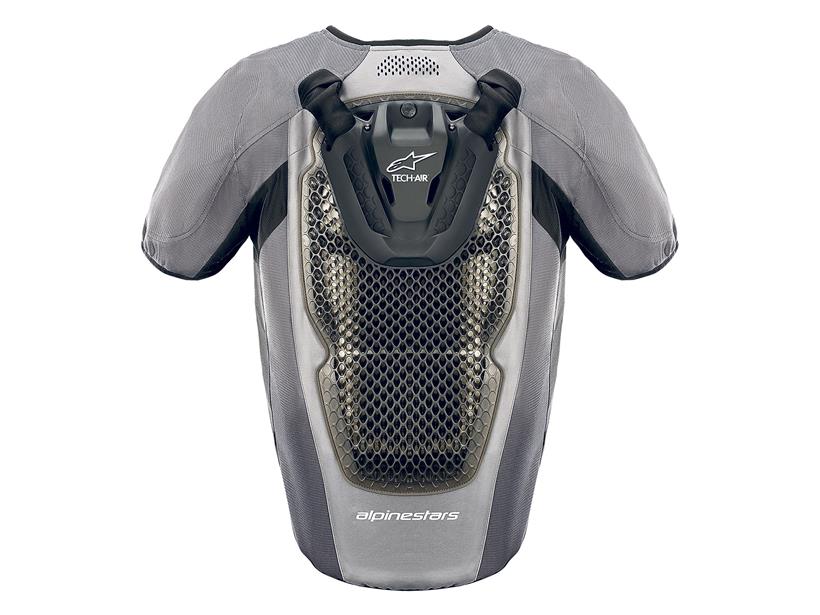 Type: Electronic with GPS universal airbag vest. Street use only.

Triggered by these crashes: Being crashed into whilst stationary, highsides, lowside, side impact, rear impact, head on impact, tumbling.

Airbag fully inflated in: 20-40ms (depending on size)

Who's Online : 2
© 2020 motorcycleinsurancenews.com.
Theme by Dinajpur IT.